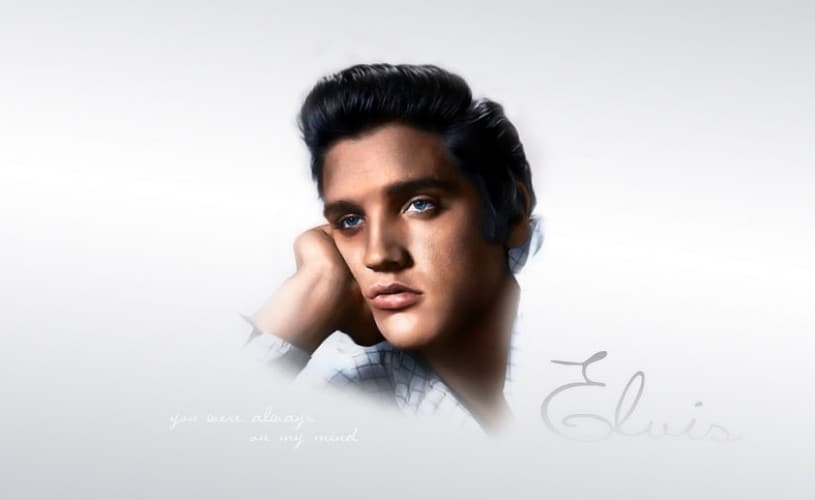 Elvis Presley’s hairstyles changed quite dramatically throughout his life. When he first exploded onto the scene in the 1950s he was unorthodox in more ways than one. His smoldering, almost latinesque, good looks were accomplished by hair dye! Yes, it is absolutely true! Unlike most young men of the time, Elvis took the courageous step of dyeing his mousy blond hair.

Born among the white working families of the American Deep South, he used both black and white influences to shape his much copied and remembered style. Because he admired Tony Curtis, another smoldering sex symbol of the time, he changed his brown hair to black and shaped it in the ducktail style popular at the time. But Elvis kept his style a bit longer and swept it into a high pompadour at the front.

Over the years, many people, both men and women, have copied this sexy, flattering look. It can be a neat, manageable daytime look, or a wild, outrageous evening do. It is said that Elvis himself used three types of hair wax so that his hair would be able to swoop in front of his eyes when he wanted it to. Along with the curling lip, this drove the ladies wild!

Let us not forget that many other young men of the day had this rockabilly look. One of the most famous of course is James Dean. These legends broke the old, twee mold of the time and imposed their own styles onto the teenage scene which was then copied across ice cream parlors and coffee shops up and down the land.

Elvis’ hair certainly was part of the complete look. There was national mourning (in certain teenage hearts) when he had it all shaved off for the army. Even so many years after his death, his hairstyle can be recognized and is copied by the rich and famous. What a fantastic legacy to leave the hairdressing world!

Getting The Perfect Elvis Presley Hairstyle

There are a lot of people around the globe that are looking for ways to get the Elvis Presley hairstyle for themselves. There are some things that need to be taken into consideration if you are to get this kind of look.

one of the first things that need to be done is regarding the color of the hair. Choosing a dark color from the drug store is a popular option that people use when it comes time for them to select the color they want. Remember that Elvis used a blue-black color for his hair and something along this line would be the best route to take.

He also had hair that had a bit of natural wave in it. To get look he had you would be best to take a picture of the King himself to the hairstylist so that they can have a visualization of what they think needs to be done with your hair. Now they can cut your hair in a similar manner.

Once the cut is complete there is the need to have styling products on hand. Gel or pomade of some sort are the best options that can be used to get the look. Be sure not to use too much of this as it will not help your attempts in achieving the look that you are after.

Now the comb comes into play. This is crucial when it comes to getting the hair in the perfect position that you want. Combing the sides of the hair straight back in the direction of the back of the head. The top section of the hair needs to be combed upwards and flipped loosely back to get the pompadour effect that Elvis was famous for.

Hair Inspo for the Modern-Day Elvis

Because Elvis Presley’s popularity never wanes, not even decades after his death, many men who are into retro aesthetics or rockabilly style still mimic the King’s blue-black locks, just with a fresh, modern twist. You might already have a haircut that lends itself well to the Elvis, as it were. Take a look at a few updated examples of the rockabilly pompadour and consider paying subtle homage to the King of Rock ‘n Roll.

The swoop is a signature element of nearly all of Elvis Presley’s rockabilly hairstyles, particular from his early days—and, let’s face it, that’s the Elvis everyone wants to emulate. Later in life, struggle-Elvis didn’t have the kind of haircut anyone really wanted to copy.

Would Elvis look like this if he hadn’t died at a relatively young age? No. He’d be way older than this, what’s the matter with you? On the real, the point is that timeless style flatters at any age. Even silver foxes can go the debonair greaser route.

The King looked his best when he wasn’t perfect—tousled hair, crooked smile, casual clothes. This boy has the carefree vibe down pat, but notice how he’s still groomed to the gawds. Gentlemen, don’t just steal the hairstyle. Take some inspiration from my guy’s beard, mustache, and eyebrows, too.

Originally, Elvis Presley’s rockabilly hairstyles relied heavily on pomade—and the pomade from the ’50s and ’60s is not the same magical styling product we know and love today. It’s hard to say whether Elvis could have managed to create a coif with such structure or architecture, but you can do it today, and that’s all that matters.

This. This is my favorite. A hard part will help to create the perfectly poofed pompadour that Elvis made famous. To be honest, this whole look works. Just the entire bit.

By following these steps you will find that you are well on your way to getting the perfect Elvis Presley hairstyle. If you have problems getting the look then try starting all over until you eventually get the look you want to obtain.